Whether you have extensive training or are brand new to the keyboard, we have a place for you. We offer studies in: 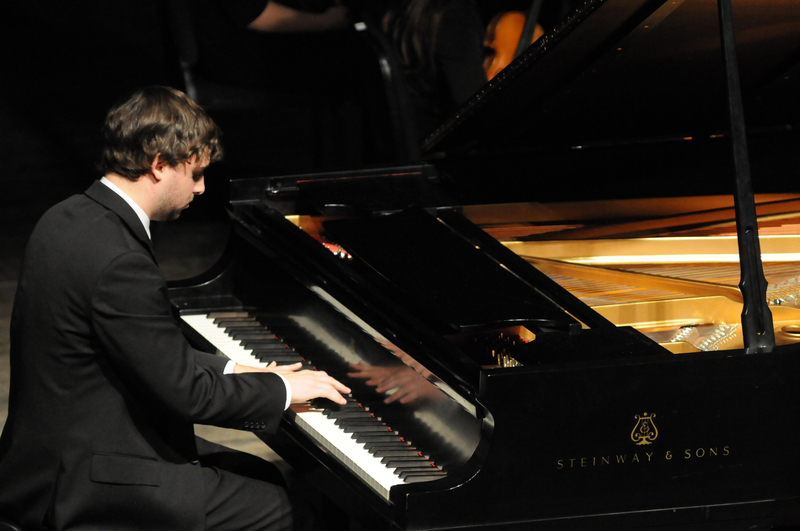 Beyond private study, there are endless opportunities to perform on stage, whether in studio classes, departmental recitals, Brown Bag concerts, Musical Showcase or the Concerto and Aria Concert.

Every other year, the organ department takes a trip to Europe to explore some of the finest historical instruments in their context. Learn more about the Organ Study Tours.

Our instruments are among the finest of their kind. Read about them below or (even better) listen to them yourself. Visit us!

Steinway Model D Concert Grand
Dr. Andrew Le, who is one of only 1,600 Steinway Artists worldwide, made a June 30, 2015, trip to the Steinway factory and showroom in Queens with Joan Conway, a professor emerita of music and pianist who taught at Hope from 1969 until retiring in 2001, and Mark DeWitt, director of corporate and foundation relations at Hope.  In consultation with Conway, Dr. Le chose Steinway Concert D #599967 for having the ideal blend of clarity, action and expressive dynamic range.
R. Kingston Concert Harpsichord
Dedicated in September 2006 by the internationally acclaimed Dr. Edward Parmentier, this instrument was built specifically for Hope by Richard Kingston of North Carolina, who has produced more than 300 instruments and in 1991 received the Spivey Award for Excellence in Instrument Building. This was the last harpsichord to be crafted by Kingston.
E.M. Skinner Chancel Organ

The main organ in the front of Dimnent Chapel was installed in 1929. It contains 48 ranks of pipes making a total of 2,932 pipes in all. These are distributed over six divisions that are controlled by a console with four manuals and a pedal keyboard. The longest pipe is 16 feet long and about 16 inches square; the smallest pipe is about one-half inch long. The organ also has two percussion stops: a set of chimes and a mechanical harp. In 1963 it was cleaned, refurbished, releathered and regulated.

Several of the divisions reflect the goals of organ builders from the American Romantic period of the early 1900s and boast numerous 8-foot (unison) stops. Such stops are intended to imitate instruments of the symphony orchestra rather than to function as members of the classic organ ensemble. Complete diapason and reed choruses are found on the Great and Swell divisions, however, and these two divisions provide the full traditional manual ensemble of the instrument. 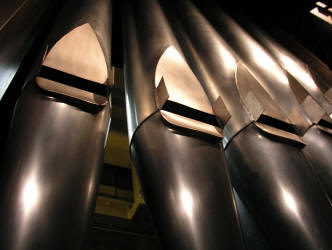 The organ has a total of eight unison, 12 octave and six pedal couplers. There are four adjustable general combination pistons affecting all stops; six combination pistons for the Great, Choir, Solo/Echo and Pedal divisions, and eight for the Swell division. Skinner Rededication Booklet

Built by Pels & van Leeuwen, Orgelmakers of Alkmaar, the Netherlands.

The gallery organ in Dimnent Memorial Chapel was built in 1970 in the style of the 17th and 18th century Dutch organ. Its pipes and action are self-contained in an oak case with speaking pipes forming a prospect across the front opening. The key action is completely mechanical, and the wind pressure is low. The organ has three divisions: the Bovenwerk, played on the upper keyboard; the Hoofdwerk, the main division played on the lower keyboard; and the Pedaal. The principal rank of pipes for each of these divisions is called the Prestant (‘show pipes’), and is located in the organ’s case. As one looks at the front of the instrument the location of the pipes for each division becomes clearly apparent: the two ‘side towers’ house the Pedaal, the upper central section houses the Bovenwerk (‘upper works’) and the lower central section houses the Hoofdwerk. The organ was a gift from Edsko and Claire Hekman in thanks to Hope College for providing their daughter Rosemary “with a priceless education.”

The studio organ was made possible by a generous gift from Mr. Gerritt Hospers (’49). Dr. Huw Lewis and the late Andrew Pennells, who was also responsible for all the technical details of the pipes, chests, action and winding systems, drew up the specification. (This instrument was the last to be designed by Andrew Pennells, who died before the organ was completed.) Construction of the instrument began in 1999 in England, and the organ was installed in the summer of 2000. J. W. Walker’s Tonal Director, David Wilson, carried out the voicing of all pipes on location. David Graber designed the organ’s case. The organ was formally dedicated on October 6, 2000.

The organ was conceived as a teaching instrument for an undergraduate curriculum; therefore, it was designed to be a versatile organ expected to accommodate a broad cross-section of organ literature rather than the music of one particular historical tradition. But while the organ is flexible, it is not an eclectic instrument. Rather it is an instrument that very much continues the tradition of post-Restoration English organ builders, who, upon returning from an extended period of Continental exile, consistently grafted French, German and Dutch ideas onto a well-defined English tradition which evolved without ever being abruptly abandoned.

The organ consists of four divisions: Great, Swell, Choir and Pedal. Of the 34 speaking stops, seven are either partially or wholly derived, yielding a total of 1,971 pipes.

The manual compass is 61 notes (C–c4), while that of the pedal is 32 notes (C–g1). The curving terraced arrangement of the stops reflects the influence of Cavaillé-Coll. The key, pedal, coupling and expression actions are mechanical; the drawstop and combination actions are electric. There are eight combination pistons for each of the four divisions: the Great and Pedal combinations may be coupled. Eight general combination pistons are available on either manual or toe pistons. All couplers may be operated by reversible toe and manual pistons. A solid state logic system provides 96 levels of memory and a combination sequencer, which may be archived onto a standard floppy disc. The organ is tuned in an unequal (though unrestricted) temperament developed in the 1980s by H. A. Kellner. There are two interchangeable pedal boards, a standard ‘Anglo-American’ pedal board and one flat pedal board.

The Casavant Concert organ (Op. 3903) was a gift by David Roossien, a friend of the college, and built by Casavant Freres of Quebec, Canada. Dedicated in February of 2016, the instrument is French symphonic in style and contains 54 ranks of pipes across four divisions. The electro-pneumatic design allows for a moveable console to accompany both ensembles and solo recitals.

Guitarist David Martin will present a faculty recital at Hope College on Thursday, April 15, at 11 a.m., with the live performance available for viewing online at hope.edu/live.