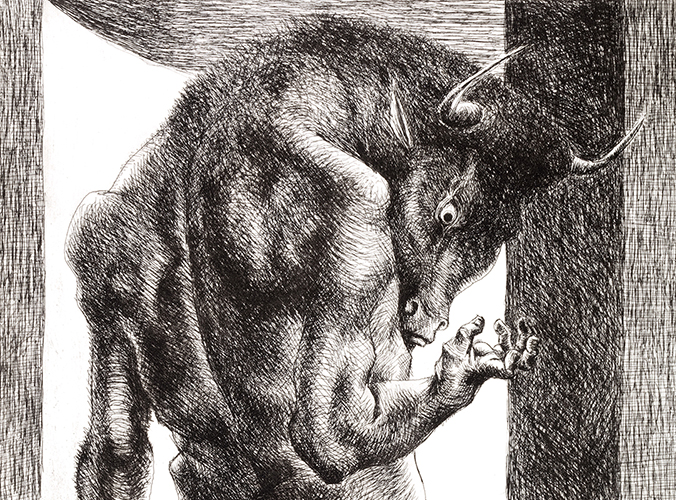 In Greek mythology, the Minotaur was a fearsome half-man, half-bull creature that lived on the island of Crete during the reign of King Minos in the early Bronze Age period. Legend says that the Minotaur was born from the unnatural union of Minos’s wife, Queen Pasiphaë, and a sacred white bull sent to Crete by Poseidon, God of the Sea. Embarrassed by and afraid of the monstrous Minotaur, King Minos ordered his court craftsman, Daedalus, to build a maze-like structure called the Labyrinth where the Minotaur could be confined and concealed from public view. The captive Minotaur was appeased with human sacrifices for years before he was eventually confronted and killed by the Athenian hero Theseus, who was aided in his deadly effort by the Minotaur’s own half-sister, Ariadne. 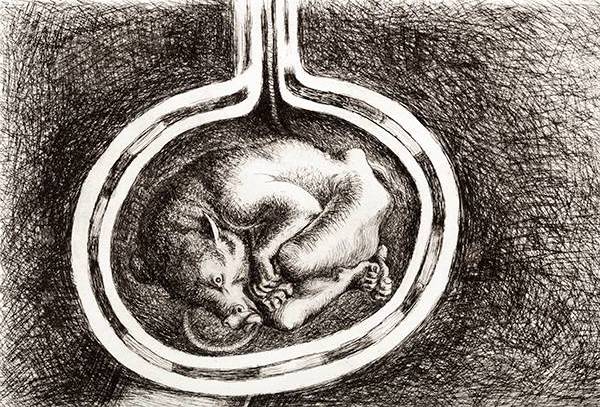 The compelling horror, intrigue and violence of the Minotaur myth has provided inspiration to numerous writers and artists from antiquity to modern times, perhaps none more so than British artist Michael Ayrton. Between 1962 and his premature death in 1975, Ayrton created more than 90 paintings, drawings, prints and sculptures inspired by the myth of the Minotaur. This remarkable body of work was rooted in Ayrton’s careful study of classical sources, but also reflected the fruits of his own imagination and his attempts to understand the story from the Minotaur’s point of view. Rather than portray the Minotaur simply as a monster or as a symbol of brute strength and voracious appetites as many previous artists had done, Ayrton focused on the Minotaur’s psychological and emotional states, emphasizing the confusion, alienation and pain felt by the Minotaur as a result of being caught between the divine, human and animal worlds.

Michael Ayrton's Minotaur Suite featured a suite of 10 etchings created by Ayrton in 1971 that portray the life of the Minotaur from conception to adulthood. By depicting the life of the Minotaur but not its death, Ayrton encourages us to sympathize with the tragic creature and to see it as a symbol of the conflicts and contradictions that exist within our own natures. The etchings were accompanied by 22 additional paintings, drawings, prints and sculptures by Ayrton that provide historical background for the Minotaur Suite and help situate the prints within the larger context of Ayrton’s career.

The exhibition was one of several that were organized by museums and galleries around Great Britain and the United States to celebrate the 100th anniversary of Ayrton’s birth. A new book about Ayrton’s life and artistic career featuring an essay by retired Hope College professor Jack Nyenhuis, one of the world authorities on Michael Ayrton, was also available for viewing in the exhibition space. The museum is immensely grateful to Professor Emeritus Jack Nyenhuis whose scholarship on Michael Ayrton underpinned the interpretive content of the exhibition and who, along with his wife Lee, lent or donated many of the artworks included in the display.