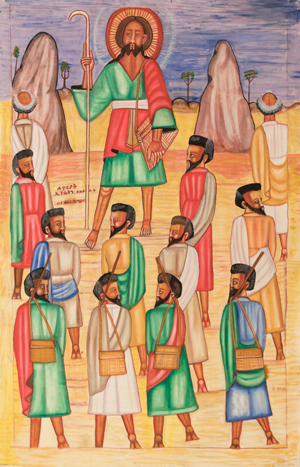 Living Tradition explores the beliefs and practices of the Ethiopian Orthodox Church as they are reflected in contemporary paintings, icons, liturgical objects and other works of art.

The 67 artworks in the exhibition were collected and donated to the Kruizenga Art Museum by Dr. Neal Sobania, a Hope alumnus from the Class of 1968 who was a Peace Corps volunteer in Ethiopia and later went on to make Eastern Africa the focus of his academic career. The exhibition will continue through Saturday, Dec. 15.

Located in the Horn of Africa on the eastern side of the continent, Ethiopia is home to a vibrant Christian culture dating back to the early fourth century CE, long before the arrival of any missionaries from Europe or America,” said exhibition curator Charles Mason, who is the director of the Kruizenga Art Museum as well as the Margaret Feldmann Kruizenga Curator of the museum. “Many Westerners whose knowledge of Ethiopia has been shaped primarily by images of famine, war, and long-distance runners winning races are surprised to learn that Ethiopia possesses a rich tradition of Christian art that has been integral to the life of the church in that country for nearly 17 centuries. This ancient tradition of Christian art continues to exert a powerful influence in Ethiopia today and is reflected in many of the artworks included in this exhibition.”

The artworks featured in the exhibition were collected and donated by Neal Sobania and his wife, Elizabeth, of Lakewood, Washington. After graduating from Hope College in 1968, Neal Sobania joined the Peace Corps and served for four years in Ethiopia. A few years later he lived and worked in Kenya doing graduate research and working for the United Nations Environmental Program. He continued to develop his interest in those countries during and after graduate school and has made Eastern Africa the focus of his academic career for more than fifty years.

The exhibition was accompanied by a fully illustrated digital catalog that can be downloaded free of charge from the Kruizenga Museum website.