Misadventures Along the Eastern Sea Road 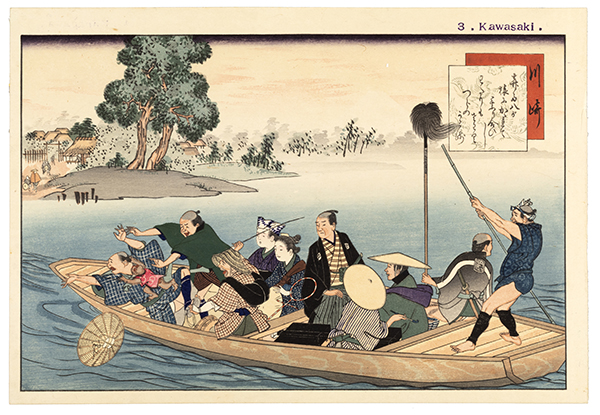 “Shank’s mare” is an old-fashioned English phrase meaning “to travel by foot.” “Tōkaidō” is a Japanese word meaning “Eastern Sea Road” and is the name of an important road that once ran along the eastern coast of Japan connecting the cities of Edo (modern Tokyo) and Kyoto. Shank’s Mare Tōkaidō is the translated English title of a famous early 19th-century Japanese novel, Tōkaidōchū Hizakurige, that tells the story of two friends who travel from town to town along the Tōkaidō experiencing many humorous adventures and mishaps as they go. The Shank’s Mare Tōkaidō novel was enormously popular in Japan during the 19th and early 20th centuries and inspired the creation of hundreds if not thousands of Tōkaidō-themed artworks, including the suite of 60 woodblock prints featured in this exhibition. 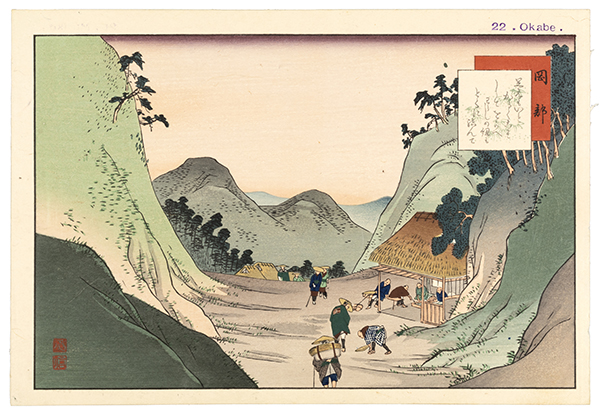 The prints displayed in the exhibition were designed by artist Fujikawa Tamenobu and published in Tokyo in 1918 by the Takamizawa Woodblock Print Company. These prints are the only known artworks by Fujikawa Tamenobu, leading some to suspect that the name is a sobriquet adopted by the artist specifically for the creation of this suite. The Takamizawa Woodblock Print Company was founded and run by Takamizawa Enji (1870–1927), an artist who worked for much of his career as a restorer and copier of 18th and 19th-century Japanese woodblock prints. Given that Takamizawa would likely have restored and copied many Tōkaidō-themed artworks earlier in his career, it is entirely possible that he designed the Shank’s Mare Tōkaidō prints himself and used the name Fujikawa Tamenobu to disguise his authorship for some unknown legal or business reasons.

Whoever Fujikawa Tamenobu was, he was highly skilled and deeply knowledgeable about the pictorial history of the Tōkaidō. Many prints in the Shank’s Mare Tōkaidō suite contain visual references to earlier images of the road, especially artworks by the great 19th-century master Utagawa Hiroshige (1797–1858) who created more than two dozen suites of Tōkaidō prints over the course of his artistic career. The aesthetic quality and art historical richness of the Shank’s Mare Tōkaidō suite mark it as an important milestone within a grand tradition of Tōkaidō-themed artworks that stretches from the late 18th century to the present day.

This exhibition of the Shank’s Mare Tōkaidō suite was arranged in the gallery according to the geographical order of the Tōkaidō’s various towns and scenic spots. Every print is numbered in the upper right corner, and although it is not necessary to view the prints in sequence, following the numbers will take you on a vicarious journey that mirrors the journey taken by the characters in the Shank’s Mare Tōkaidō novel.

Shank’s Mare Tōkaidō: Misadventures Along the Eastern Sea Road was an original exhibition organized by the Kruizenga Art Museum. The museum is grateful to Dr. Ronald ’62 and Gerri Vander Molen for lending some of the supplementary artworks included in the exhibition.