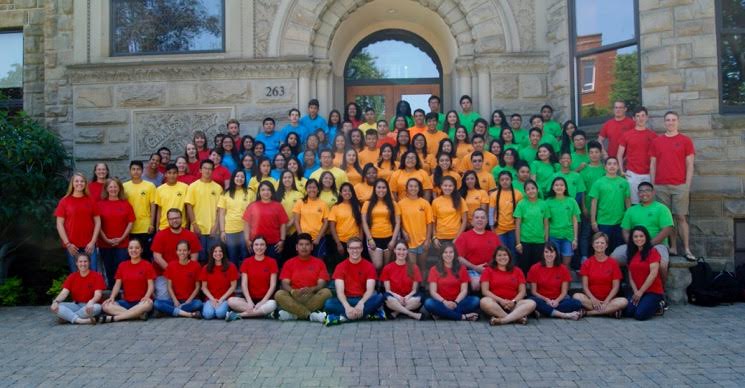 TRIO is a set of seven federally-funded educational opportunity outreach programs and one staff training program. It seeks to motivate and support students from disadvantaged backgrounds, namely low-income and/or first-generation students.

The TRIO programs were the first national college access and retention programs to address the serious social and cultural barriers to education in America. (Previously only college financing had been on policymakers’ radar.)

TRIO began as part of President Lyndon B. Johnson’s War on Poverty. The Educational Opportunity Act of 1964 established an experimental program known as Upward Bound. Then, in 1965, the Higher Education Act created Talent Search. Finally, another program, Special Services for Disadvantaged Students (later known as Student Support Services), was launched in 1968. Together, this “ trio” of federally funded programs encouraged access to higher education for low-income students.

By 1998, the TRIO programs had become a vital pipeline to opportunity, serving traditional students, displaced workers and veterans. The original three programs had grown to eight, adding Educational Opportunity Centers in 1972, Training Program for Federal TRIO programs in 1976, the Ronald E. McNair Post-baccalaureate Achievement Program in 1986, Upward Bound Math/Science in 1990 and the TRIO Dissemination Partnership in 1998.

The Need for TRIO

The United States needs to boost both its academic and economic competitiveness globally. In order to foster and maintain a healthy economy and compete globally, the United States needs a strong, highly-educated and competent workforce. To be on par with other nations, the country needs students, no matter their background, who are academically prepared and motivated to achieve success.

Low-income students are being left behind

Only 38% of low-income high school seniors go straight to college as compared to 81% of their peers in the highest income quartile. Then, once enrolled in college, low-income students earn bachelor’s degrees at a rate that is less than half of that of their high-income peers: 21% as compared with 45%.

The growing achievement gap in our country is detrimental to our success as a nation. There is a tremendous gap in educational attainment between America's highest and lowest income students — despite similar talents and potential. While there are numerous talented and worthy low-income students, relatively few are represented in higher education, particularly at America's more selective four-year colleges and universities. While nearly 67% of high-income, highly qualified students enroll in four-year colleges, only 47% of low-income, highly-qualified students enroll. Even more startling, 77% of the least qualified high-income students go on to college, while roughly the same proportion of the most qualified low-income students go on to college. (ACSFA 2005)